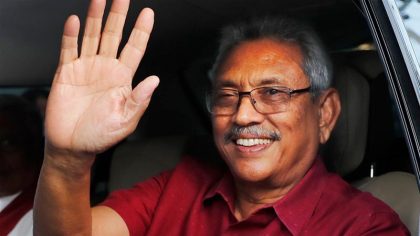 Gotabaya Rajapaksa was on 18 November 2019, sworn in as Sri Lanka’s seventh President at an ancient Buddhist temple.

The swearing-in ceremony took place at the Ruwanweli Seya, a stupa and a hemispherical structure containing relics and considered sacred to Buddhists all over the world, in the ancient north central town of Anuradhapura, around 200 kms from the national capital Colombo. Rajapaksa is the first president to be sworn in outside Colombo.

The stupa which is considered sacred to Buddhists all over the world was built by King Dutugemunu in the 140 B.C., who reigned over the country after defeating Tamil King Elara.

Gotabaya Rajapaksa was credited for ending the military campaign of the Liberation Tigers of Tamil Eelam (LTTE) who ran a 30-year war to create a separate Tamil homeland in the north and east of the island.

Gotabaya Rajapaksa is the younger brother of the former President Mahinda Rajapaksa who was a special guest at the ceremony.

Gotabaya Rajapaksa is also the first civil servant to become president, only the first sibling of a president to win presidency, the first president in the history to be inducted in office without even spending a day as a parliamentarian.