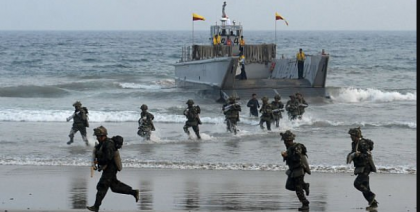 The Indian Navy, in collaboration with Indian Coast Guard, Cochin Port Trust and all other concerned stakeholders, conducted a large-scale anti-hijacking exercise off the Port of Kochi. This was the first time that such a large-scale exercise involving all stakeholders was conducted in Kerala, according to the defence press release.

The exercise code-named Apharan saw participation of multiple agencies, including more than 12 ships and helicopters of the Indian Navy, Indian Coast Guard and Cochin Port Trust. “As part of the scenario, interdiction of a rogue vessel outside Kochi port and insertion of Marine Commandos onto the rogue/hijacked vessel through boarding operations, as well as slithering down onto its deck from a Sea King helicopter were conducted,” the release said.

Apharan was aimed at streamlining the response mechanism/preparedness to thwart any attempt by anti-national elements to hijack a merchant vessel or attempt forced entry of a rogue/commandeered merchant vessel into the Kochi harbour. Within the ambit of coastal security architecture, hijacking of a merchant vessel is one of the challenging scenarios, response to which requires synergy of resources, assets and efforts of all stakeholders, including the state government, the release said. The exercise was conducted under the aegis of the Commander-in-Chief, Coastal Defence (Flag Officer Commanding-in-Chief, Southern Naval Command), Kerala. The drill provided an opportunity to all stakeholders to assess the preparedness of their respective organisations, identify gaps to address them on priority as well as top formulate an integrated crisis managements plan for Kochi Port.