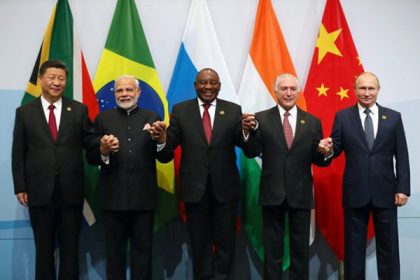 “Terrorism has caused a loss of $1 trillion to the world economy and the atmosphere it created has indirectly and deeply harmed trade and business”, Prime Minister Narendra Modi said at the BRICS Summit.

Addressing the plenary session of the 11th BRICS Summit at the iconic Itamaraty Palace in the presence of the Presidents of Brazil, China, Russia and South Africa, Mr. Modi said terrorism had emerged as the biggest threat to development, peace and prosperity. “According to some estimates, the economic growth of developing nations has decreased by 1.5% due to terrorism,” he said, adding that the scourge had caused loss of $1 trillion to the world economy.

In 10 years, terrorism had claimed the lives of 2.25 lakh people and destroyed societies, he said.

The atmosphere of doubt created by terrorism, terror-financing, drug-trafficking and organised crime indirectly and deeply harms trade and business.

He called for special attention to mutual trade and investment, saying intra-BRICS trade accounts for 15% of the world trade, while its combined population is 40% of the world’s population.

India and China have agreed to hold another meeting on matters relating to the boundary question after Prime Minister Narendra Modi met Chinese President Xi Jinping on the sidelines of the BRICS Summit in Brasilia, according to an official statement.

The 21st round of the border talks led by the Special Representatives – India’s National Security Adviser Ajit Doval and Chinese State Councillor and Foreign Minister Wang Yi – were held at Chengdu in China in November last year (2018).

According to a statement issued by the External Affairs Ministry, Mr. Modi and Mr. Xi “noted that the Special Representatives will have another meeting on matters relating to the boundary question and reiterated the importance of maintaining peace and security along the border areas”.

The statement, however, did not mention the time frame for the next round of talks. Mr. Modi and Mr. Xi are in Brazil for the BRICS Summit.

During the 21st round of talks, both sides resolved to “intensity” and “advance” the dialogue for an early settlement of the dispute, according to the official statements issued by both sides after the talks. The two officials also underscored the need for maintaining peace along the border.