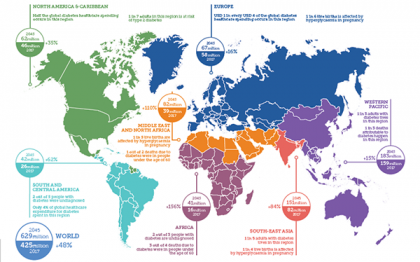 The ninth edition of the IDF Diabetes Atlas offer projections that continue to put India at the second slot right up to 2045. The numbers are staging – just over 134 million Indians will be diabetics in the next 25 years.

India is at the top among a clutch of countries in south-east Asia – Bangladesh, Sri Lanka, Nepal and Mauritius. Bangladesh, which is second on the list of top five countries (20-79 years), however, has only 8.4 million diabetics.

The IDF has stressed the urgency to develop and implement multi-sectoral strategies to combat the growing epidemic. “Diabetes, being a lifestyle disorder with multi-dimensional causative factors, definitely needs a multi-dimensional approach.

“Once diabetes is diagnosed, currently, there is only fragmented care, especially because our health delivery system is modelled for acute care rather than for chronic care”.

The way ahead, all experts concurred, was a focus on prevention. India needs a more effective national diabetes prevention programme which will require co-operation from several quarters, including medical education, health awareness in schools and urban planning.

In addition to people with diabetes, the country also has a huge burden of pre-diabetics.