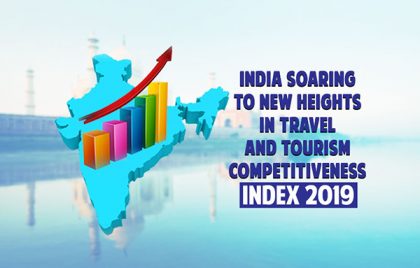 India’s ranking improved from 40th to 34th, the greatest improvement over 2017 among the top 25 per cent of all countries ranked in the report.

“India, which accounts for the majority of South Asia’s T&T (travel and tourism) GDP, remains the sub-region’s most competitive T&T economy, moving up six places to rank 34th globally”, the report said.

As per the report, China, Mexico, Malaysia, Thailand, Brazil and India – which are not high income economies but rank in the top 35 in the overall list – stand out in the Cultural Resources and Business Travel Pillar through their combination of rich natural and cultural resources and strong price competitiveness.

“India showed the greatest percentage improvement to its overall Travel & Tourism Competitiveness Index (TTCI) score, which has helped it become the only lower-middle income country in the top 35,” the report said and lauded its natural and cultural assets and price competitiveness.

Compared to global benchmarks, the country can also add price competitiveness (13th) to its roster of strengths, the report notes.

The Travel & Tourism Competitiveness Index (TTCI), that covered 140 economies, measures the set of factors and policies that enable sustainable development of travel and tourism sector which contributes to the development and competitiveness of a country.

Spain held on to the top spot in the World Economic Forum’s (WEF) latest Travel and Tourism Competitiveness Report (TTCR), which ranked 140 countries on their relative strengths in global tourism and travel. Spain was followed by France, Germany and Japan, with the United States replacing the UK in the top five.

The report further added that Asia-Pacific was one of the fastest-growing travel and tourism regions in this year’s ranking.

Pakistan (121st) remains the least competitive country in South Asia when it comes to T&T, including the region’s least favourable safety and security (134th) conditions.