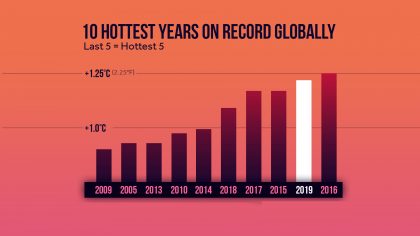 The year 2019 was declared as the second warmest year ever by the European weather agency’s Copernicus climate change programme. Only 2016 has been measured to be warmer previously.

Early, the India Meteorological Department (IMD) had said 2019 was the seventh warmest year on record for India. With Australia witnessing perhaps the worst spate of forest fires in its history, attributable to global warming, 2020 has started with a series of grim news on the climate change front.

The Copernicus programme, run by the European Centre for Medium Range Weather Forecasting, said the average annual global surface temperature in 2019 was 0.59°C higher than the average of the 30-year period 1981-2010, which is taken to be normal in current assessments. Compared to pre-industrial times, a reference to the 1850-1900 period, which is considered the baseline in climate change debates, 2019 was 1.2°C warmer. Within 2019, December clocked its own record. With temperatures 0.74°C above average, 2019 had the warmest December ever, alongside the 2015 December which was similarly warm.

The extent of sea ice, both in the Arctic and the Antarctic, is often taken as an important indicator of the impact that global warming was causing. The Copernicus programme said the Antarctic sea ice extent was the third lowest ever in December 2019 since the start of satellite observations in 1979. The Antarctic sea ice extent was 9.3 million square km on an average, which was about 15% lower than the 1981-2010 average for the month. In the Arctic, the sea ice was 11.8 million square km, about 8% below the average. The lowest December sea ice near the Arctic was recorded in 2010 when it was 11% below the average.

Findings of the climate report on India

Annual temperatures have remained high despite the winters being one of the coldest in recent decades. The winter season extending from November 2018 to February 2019 was colder than average, globally. Meteorologists attributed it to be the effect of a phenomenon called the Arctic vortex. Generally, cold winds blow from west to east around the North Pole. But due to global warming, warming over the Poles happens at a faster rate than other regions on the globe. As a result, these cold westerly winds, which otherwise remain restricted to the North Pole, were disturbed and started blowing to southern latitudes of the northern hemisphere.

During the last winter season, these winds even reached India in the form of cold blasts. All of north India recorded severe cold that triggered snow avalanche in higher reaches. According to Met officials, snow avalanches are common in the years when there is very severe snowfall leading to huge amounts of snow accumulation.

Reason for the rising temperature

Temperatures in India were in line with global trends in 2019. And though there could have been a variety of other local and regional reasons that contributed to the warming over India, scientists point out at least two that would have been responsible.

One of these was an El Nino that prevailed for a particularly long time. The other factor was the timing of the monsoon.

El Nino years are warmer usually, as they interfere with the monsoon, make both summer and winter warmer than normal. There is excess clouding experienced that pushes the temperatures. Last year, some effects of El Nino lasted till July.

Delayed Monsoon : A week-long delay in the onset of the southwest monsoon in June last year contributed to the season being the warmest ever. “The rainfall gained momentum only from August and continued to linger on till mid-October”. This delay, coupled with less rainfall recorded during June and July, led to a further increase in the season’s average temperature. The June to September monsoon season saw a record warming in 119 years. The average seasonal temperature was +0.58°C higher than normal. This, despite the season producing excess rainfall, ending with 109 per cent of the Long Period Average.