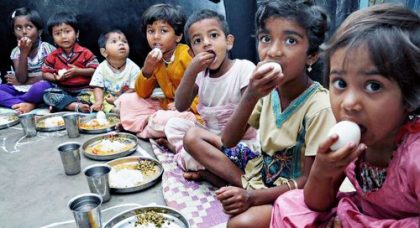 Malnutrition affects chances of survival for children, increases their susceptibility to illness, reduces their ability to learn, and makes them less productive in later life. It is estimated that malnutrition is a contributing factor in about one-third of all deaths of children under the age of 5.

Over the decade between 2005 and 2015, there has been an overall reduction in the proportion of underweight children in India, mainly on account of an improvement in stunting. While the percentage of stunted children under 5 reduced from 48% in 2005-06 to 38.4% in 2015-16, there has been a rise in the percentage of children who are wasted from 19.8% to 21% during this period. A high increase in the incidence of wasting was noted in Punjab, Goa, Maharashtra, Karnataka, and Sikkim.

The prevalence of underweight children was found to be higher in rural areas (38%) than urban areas (29%). According to WHO, infants weighing less than 2.5 Kg are 20 times more likely to die than heavier babies. In India, the national average weight at birth is less than 2.5 Kg for 19% of the children. The incidence of low birthweight babies varied across different states, with Madhya Pradesh, Rajasthan and Uttar Pradesh witnessing the highest number of underweight childbirths at 23%.

Further, more than half of India’s children are anaemic (58%), indicating an inadequate amount of haemoglobin in the blood. This is caused by a nutritional deficiency of iron and other essential minerals, and vitamins in the body.

Various government initiatives have been launched over the years which seek to improve the nutrition status in the country. These include the Integrated Child Development Services (ICDS), the National Health Mission, the Janani Suraksha Yojana, the Matritva Sahyog Yojana, the Mid-Day Meal Scheme, and the National Food Security Mission, among others. However, concerns regarding malnutrition have persisted despite improvements over the years. It is in this context that the National Nutrition Strategy has been released. Key features of the Strategy include :

The Strategy aims to reduce all forms of malnutrition by 2030, with a focus on the most vulnerable and critical age groups. The Strategy also aims to assist in achieving the targets identified as part of the Sustainable Development Goals related to nutrition and health.

The Strategy aims to launch a National Nutrition Mission, similar to the National Health Mission. This is to enable integration of nutrition-related interventions cutting across sectors like women and child development, health, food and public distribution, sanitation, drinking water, and rural development.

A decentralised approach will be promoted with greater flexibility and decision making at the state, district and local levels. Further, the Strategy aims to strengthen the ownership of Panchayati Raj institutions and urban local bodies over nutrition initiatives. This is to enable decentralised planning and local innovation along with accountability for nutrition outcomes.

The Strategy proposes to launch interventions with a focus on improving healthcare and nutrition among children. These interventions will include: (i) promotion of breastfeeding for the first six months after birth, (ii) universal access to infant and young child care (including ICDS and crèches), (iii) enhanced care, referrals and management of severely undernourished and sick children, (iv) bi-annual vitamin A supplements for children in the age group of 9 months to 5 years, and (v) micro-nutrient supplements and bi-annual de-worming for children.

Governance reforms envisaged in the Strategy include: (i) convergence of state and district implementation plans for ICDS, NHM and Swachh Bharat, (ii) focus on the most vulnerable communities in districts with the highest levels of child malnutrition, and (iii) service delivery models based on evidence of impact.

Malnutrition caused 69 per cent of deaths of children below the age of five in India, according to a UNICEF report.

In its report – The State of the World’s Children 2019, UNICEF said that every second child in that (below the age of 5) age group is affected by some form of malnutrition. This includes stunting (35%), wasting (17%) and overweight (2%). Only 42% of children (in the age group of
6 to 23 months) are fed at adequate frequency and 21% get adequately diverse diet. Timely complementary feeding is initiated for only
53 per cent of infants aged 6-8 months.

About Indian women’s health, it said every second woman is anaemic. It also said that anaemia is the most prevalent in children under the age five years. Its prevalence among adolescent girls is twice that of adolescent boys.

Indian children are being diagnosed with adult diseases such as hypertension, chronic kidney disease and pre-diabetic.

The data states that children under the age of five years are affected by micronutrient deficiencies. While every fifth child under the age five is vitamin A deficient, one in every third baby has vitamin B12 deficiency and two out of every five children are anemic.

The report said POSHAN Abhiyaan or the National Nutrition Mission is playing a major role in improving nutrition indicators across India. The Anaemia Mukt Bharat programme to fight anaemic prevalence has been recognized as one of the best programmes implemented by governments across the world to address malnutrition.

The 6×6×6 strategy (six target beneficiary groups, six interventions and six institutional mechanisms) of the programme has been highlighted for using anaemia testing and treatment as the entry point to provide information on healthy diets.

Overweight and obesity increasingly begin in childhood with a growing threat of noncommunicable diseases like diabetes (10 per cent) in school-aged children and adolescents.

Urban India is moving into an unhealthy food snacking environment, which is influencing children’s food choices and this is spreading to rural areas. Food consumption patterns in India reveal that child diets are largely starved of proteins and micronutrients and are influenced by household (adult) food choices.

Over the decades, despite growing incomes, protein-based calories remain low and unchanged, and the calorific share of fruits and vegetables has declined. The report said globally 77 per cent of processed food sales are controlled by just 100 large firms.

In cities, many poor children live in “food deserts” or in “food swamps”. Regarding the situation globally, the UNICEF’s report said at least one in three children under five years of age – or 200 million – is either undernourished or overweight. The report states that almost two in three children between six months and two years of age are not fed food that supports their rapidly growing bodies and brains. This puts them at risk of poor brain development, weak learning, low immunity, increased infections and, in many cases, death, the report said.