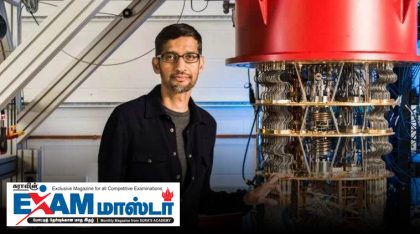 Scientists claimed that they have achieved a near-mythical state of computing in which a new generation of machine vastly outperforms the world’s fastest supercomputer, known as “quantum supremacy”. A team of experts working on Google’s Sycamore machine said their quantum system had executed a calculation in 200 seconds that would have taken a classic computer 10,000 years to complete. Regular computers, even the fastest, function in binary fashion : they carry out tasks using tiny fragments of data known as bits that are only either 1 or 0. But fragments of data on a quantum computer, known as qubits, can be both 1 and 0 at the same time. This property, known as superposition, means a quantum computer, made up of several qubits, can crunch an enormous number of potential outcomes simultaneously.

The computer harnesses some of the most mind-boggling aspects of quantum mechanics, including a phenomenon known as “entanglement” – in which two members of a pair of bits can exist in a single state, even if far apart.

In a study published in Nature, the international team designed the Sycamore quantum processor, made up of 54 qubits interconnected in a lattice pattern.

They used the machine to perform a task related to random­-number generation, identifying patterns amid seemingly random spools of figures.

The Sycamore, just a few millimetres across, solved the task within 200 seconds, a process that on a regular machine would take 10,000 years – several hundreds of millions of times faster, in other words.