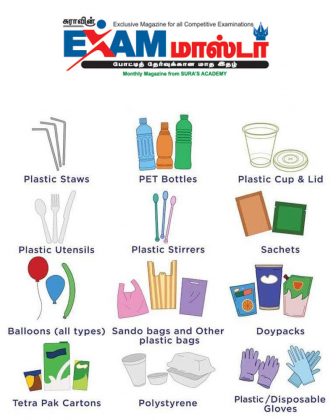 Single-use plastics, often also referred to as disposable plastics, are commonly used for packaging and include items intended to be used only once before they are thrown away or recycled. These include, among other items, grocery bags, food packaging, bottles, straws, containers, cups and cutlery. Plastic packaging is mostly single-use, especially in business-to-consumer applications, and a majority of it is discarded the same year it is produced. Such plastics are problematic because they are non-biodegradable, they linger on for long on land and sea. There is no ban on Single-use plastics till now.

Why is it difficult to ban single-use plastics ? India has Plastic Waste Management Rules, 2018. One of its key obligations is to have industries that make products that ultimately employ plastic (and generate plastic waste) collect a fixed percentage every year. The State Pollution Control Boards as well municipalities have the responsibility to ensure that plastic waste is collected and sent to recycling units.

Compared with countries such as the U.S. and China, India has very low per capita generation of plastic waste. However, in real terms, this is quite substantial and nearly 10,000 tonnes of plastic waste is left uncollected every day. Studies by organisations like The Energy Resources Institute on landfills have found that 10.96% of waste was only plastic and of these, non-recyclable plastics accounted for 9.6%. The disparity is because certain kinds of plastic, such as bottles, are remunerative for rag-pickers as they are in demand at recycling facilities.