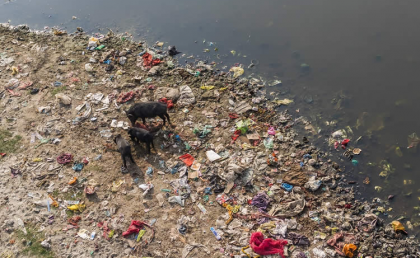 The findings are part of a report, which is the third edition of an exercise conducted by the Central Water Commission (CWC) from May 2014 to April 2018. Samples from only one-third of water quality stations were safe. The rest, or 287 (65%) of the 442 sampled, were polluted by heavy metals. Samples from 101 stations had contamination by two metals, six stations saw contamination by three metals. Iron emerged as the most common contaminant with 156 of the sampled sites registering levels of the metal above safe limits. None of the sites registered arsenic levels above the safe limit.

The presence of metals in drinking water is to some extent unavoidable and certain metals, in trace amounts, required for good health. However when present above safe limits, they are associated with a range of disorders.

The other major contaminants found in the samples were lead, nickel, chromium, cadmium and copper. The study spanned 67 rivers in 20 river basins. Lead, cadmium, nickel, chromium and copper contamination were more common in non-monsoon periods while iron, lead, chromium and copper exceeded ‘tolerance limits’ in monsoon periods most of the time. “Arsenic and zinc are the two toxic metals whose concentration was always obtained within the limits throughout the study period,”the report noted. Arsenic contamination is a major environmental issue that affects groundwater. However, the CWC exercise was restricted to surface water.

Not all the rivers are equally sampled. Several rivers have only been sampled at a single site whereas others such as the Ganga, the Yamuna and the Godavari are sampled at multiple sites. Marked variation was found in contamination levels depending on the season. For instance, iron contamination was persistent through most of the Ganga during monsoon but dipped significantly during the non-monsoon periods.

The main sources of heavy metal pollution are mining, milling, plating and surface finishing industries that discharge a variety of toxic metals into the environment.

“Over the last few decades, the concentration of these heavy metals in river water and sediments has increased rapidly”, the report noted, while recommending more intensive monitoring. The Authors of the report reasoned that this current phase of contamination is due to excess population and rise in agricultural and Industrial activities.