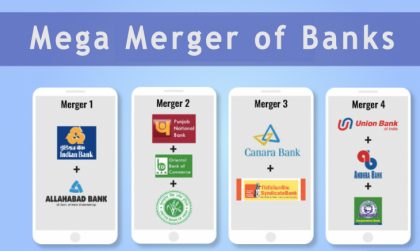 The Indian banking industry has turned a full circle since the nationalism of 14 major banks in 1969 to achieve the socialist goals set by the then government headed by Indira Gandhi. The reluctance of those banks to serve the masses and their main focus was on profits forced the Indira Gandhi Government which had the primary motive of ‘Garibi hatao‘, to nationalise the banks so that under the government control, branches can be opened in rural areas and needs of the poor can be met, as many millions of Indians had not tasted the banking services. Further the recruitment and service conditions of employees in a major sector like banking were not in line with the government’s policy of ‘Socialistic Pattern’.

Though the nationalisation was a big event to be celebrated, the speed of banking activity got accelerated after globalisation of Indian economy in 1990s. There was strong need for capital for new ventures and for big corporates both national and international were laying foundations for their industrial units.

The speedy industrial activity was accompanied by other infra-structural activities which needed the help of banks. After two decades of speedy growth of Indian economy, the fissures in the banking system started surfacing in the form of non-performing assets (NPA) which in the recent past have crossed more than several lakhs of crores. A close study reveals that such a dangerous situation has arisen due to the free hands given to bank managements without strict government control. Unscrupulous borrowers who have laundered money from banks have diverted to their non-business activities not only in India but staked abroad. Many have escaped when the banks were caught napping. Now there arises an urgent need not only to recover the bad loans but to streamline the credit disbursals and in short to supervise the entire activities of the banks. Hence the need of the hour is banking reforms. The first step taken towards this direction is ‘mega bank mergers’. Earlier, a few subsidiary banks were merged with State Bank of India. A few months ago, on 1st April 2019, the merger of Dena Bank and Vijaya Bank with Bank of Baroda came into effect. Now to create banks of global level to achieve the target of 5 trillion dollar economy in 2025 warrant this measure. By these mergers, not only geographical synergies but cost energies also that will be achieved must be taken into account. There is no doubt that all banks are over staffed in this digital era. Governance and management also need overhauling. Of course, the government has announced a few measures to make managements better accountable to the board. The prime concern of the government in appointing board members must be to ensure only the professionals with good trade record only must be considered without any kind of political favouritism. However the government instead of having indulged in wholesale mergers as has been done now, it could have tested the waters with slow and steady phased out mergers.

Now the total number of nationalised banks has now downed from 17 to 12. Before infusing with Rs. 70,000 crore, as promised in the Budget 2019-20, the major step of mergers has taken place. However, all these measures seem to be short-term reprieves. Only structural changes will ensure the healthy functioning of banks. But, these kinds of mergers earlier have not yielded any desirable results. To cite an example, the merger of troubled New Bank with Punjab National Bank in 1993 was messy and failed to create significant synergies. The dangers of mergers is that instead of the strong banks lifting the weak, the weak ones may sink the strong. Post-merger performance by Bank of Baroda is downgraded on the fall of its share price from Rs. 150/- a year ago to Rs. 92 now. However, the resilience nature of Indian economy shows silver lining in the dark clouds. Certainly the banking reform is one of measures that must be taken to restore our derailed economy on the tracks of robust growth.

The Government of India issued the Banking Companies (Acquisition and Transfer of Undertakings) Ordinance, 1969 and nationalised the 14 largest commercial banks with deposits of over Rs 50 crores with effect from the midnight of 19 July 1969. These banks contained 85 percent of bank deposits in the country. Within two weeks of the issue of the ordinance, the Parliament passed the Banking Companies (Acquisition and Transfer of Undertaking) Bill, and it received presidential approval on 9 August 1969.

The following banks were Nationalised in 1969:

The following banks were Nationalised in 1980: