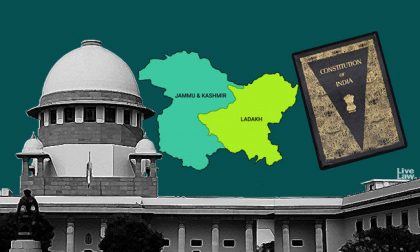 Ending Jammu and Kashmir’s special status in the Indian Union, the government extended all provisions of the Constitution to the State in one go, downsized the State into two Union Territories and allowed all citizens to buy property and vote in the State.

The first resolution informed the House that the President had used his powers under Article 370 to fundamentally alter the provision, extending all Central laws, instruments and treaties to Kashmir. However, the drastically altered Article 370 will remain on the statute book.

Article 370 granted an autonomous status to Jammu and Kashmir, while Article 35A, incorporated into the Constitution in 1954, provided special rights and privileges to the citizens of the state.

In October 1947, the then-Maharaja Hari Singh of Kashmir signed the ‘Instrument of Accession’, which specified three subjects on which Jammu and Kashmir would transfer its powers to the government of India: 1. Foreign affairs, 2. Defence and 3. Communications. In March 1948, the Maharaja appointed an interim government in the state, with Sheikh Abdullah as the Prime Minister. In July 1949, Sheikh Abdullah and three other colleagues joined the Indian Constituent Assembly and negotiated the special status of Jammu and Kashmir, leading to the adoption of Article 370.

Parliament needed the Jammu and Kashmir government’s nod for applying laws in the state – except defence, foreign affairs, finance, and communications.

It is important to note Article 370(1)(c) explicitly mentions that Article 1 of the Indian Constitution applies to Kashmir through Article 370. Article 1 lists the states of the Union. This means that it is Article 370 that binds the state of Jammu and Kashmir to the Indian Union.

Article 35A gave the Jammu and Kashmir Legislature full discretionary power to decide who the ‘permanent residents’ of the state are. It gave them special rights and privileges regarding employment with the state government, acquisition of property in the state, settling in the state, and the right to scholarships and other forms of aid that the state government provides. It also allows the state legislature to impose any restrictions upon persons other than the permanent residents regarding the above.

To guarantee these special rights and privileges, the Article says no act of the state legislature that comes under it can be challenged for violating the Constitution or any other laws.

The government on August 5 issued a decree abolishing Article 370 of the Constitution, which gave special autonomy to Jammu and Kashmir. The Article had limited the power of the Parliament to impose laws in the State. A look at the events that led to Jammu and Kashmir receiving special status.

November 1, 1858 : Half of Indian territories were princely States at the time of “Queen Victoria’s proclamation” which effectively said that the queen would govern India.

Jammu and Kashmir was one such princely State ruled by kings of the Dogra lineage under the British who were the ultimate power.

August 1947 : At the time of Indian independence, there were 565 princely States.

The king of the border State did not sign the instrument of accession in favour of either India or Pakistan and remained indecisive.

October 1947 : After the withdrawal of the British, barely months after independence, armed tribesmen invaded Kahsmir from the Pakistan border. King Hari Singh wrote a latter to Lord Mountbatten, the Governor General of India, seeking help. He attached a signed Instrument of Accession to India.

The Governor General of India signed the acceptance. According to the instrument, defence, external affairs and communications were transferred to India’s governance and the rest would be retained by the ruler.

March 1948 : Hari Singh made a proclamation to convene a National Assembly and work out a new constitution for the State.

Sheikh Mohammed Abdullah was appointed as Prime Minister of an interim government in the State of Jammu and Kashmir.

January 26, 1950 : The Constitution came into effect and India became a democratic Republic.

May 1951 : Yuvraj Karan Singh issued a proclamation for the election of a Constituent  Assembly in the State. Jammu and Kashmir National Conference (JKNC) won 75 out of 75 seats.

February 1954 : Jammu and Kashmir Constituent Assembly ratified the State’s accession to India. The process of integration with India was complete.

Internal administration was retained by the State.

But unlike most of the other princely States, which accepted the Constitution of India in totality, Jammu and Kashmir relationship to India was guided only based on the Instrument of Accession.

The Jammu and Kashmir Reorganisation Bill, 2019

The Assembly will have a term of five years, and the Lieutenant Governor must summon the Assembly at least once in six months. The Legislative Assembly may make laws for any part of the Union Territory of Jammu and Kashmir related to: (i) any matters specified in the State List of the Constitution, except “Police” and “Public Order”, and (ii) any matter in the Concurrent List applicable to Union Territories.  Further, Parliament will have the power to make laws in relation to any matter for the Union Territory of Jammu and Kashmir.

Council of Ministers : The Union Territory of Jammu and Kashmir will have a Council of Ministers of not more than ten percent of the total number of members in the Assembly.  The Council will aide and advise the Lieutenant Governor on matters that the Assembly has powers to make laws.  The Chief Minister will communicate all decisions of the Council to the Lieutenant Governor.

The UNSC has not yet put out a statement, but after the meeting India insisted that issues around Article 370 and special status to Jammu and Kashmir were an internal matter. The Indian Ambassador to the UN, Syed Akbaruddin, accused Pakistan and China of attempting to impart greater signification to the meeting than was warranted. One question that has been raised is about the situation in the Kashmir Valley now.

When did the UNSC first discuss Jammu and Kashmir ?

The Kashmir issue at the UN debuted on January 1, 1948 as India urged the UNSC to discuss the conflict that had erupted three months earlier when Pakistan sent irregulars, tribals and camouflaged soldiers into Kashmir prompting the Maharaja of the princely Indian State to accede to India.

Under Resolution 39 on January 20, 1948, the UNSC set up a three­ member UN Commission for India and Pakistan (UNCIP). Disagreement between India and Pakistan led to the first failure as the commission failed to materialise. The commission was finally reconstituted with five members on April 21, 1948 and it was mandated to plan a mechanism to ensure a plebiscite in the State. (This was part of the UNSC Resolution 47). The UNSC Resolution 47 passed on this date urged India and Pakistan to hold a plebiscite after restoration of law and order. The UNCIP passed a resolution on January 5, 1949 that provided the mechanism for holding a “free and impartial plebiscite” in Kashmir.

Why did the plebiscite plan fall through ?

The 1947-48 India-Pakistan war ended in a ceasefire but the Kashmir solution remained elusive. A key condition for the plebiscite was withdrawal of Pakistan from the areas under its control and India withdrawing individuals who were not residents of the State. However, neither of this happened. Instead both sides firmed up their presence in the areas under their control.

Relevance of the Simla Agreement

Under the Simla Agreement of July 2, 1972, India gained Pakistan’s commitment that the Kashmir conflict would be resolved bilaterally.

The Northern Areas and Azad Kashmir were territories of the princely Indian State of Jammu and Kashmir that were awaiting plebiscite but the case for “accession” ruined the chance of Pakistan acting in accordance with the conditions of plebiscite.

Several of them have urged India and Pakistan to resolve the issue bilaterally — as India too has argued. Pakistan’s Foreign Minister Shah Mahmood Qureshi had gone to the UN with China’s support but the heightened military tension on the Line of Control and the ground situation on both sides show that the conditions in which the UNSC had passed its early resolutions on Kashmir do not exist any longer. Discussing the issue under UN auspices will be difficult for several reasons. First, the two parties (India and Pakistan) have continued the process of assimilation of territories under respective control into their union of states. Second, both sides had agreed to deal with it bilaterally.