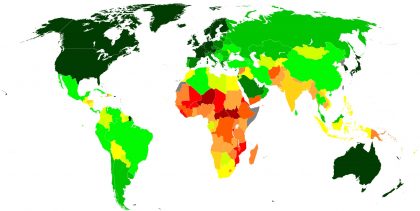 Norway, Switzerland and Ireland occupied the top three positions in that order. Germany is placed fourth along with Hong Kong, and Australia secured the fifth rank on the global ranking.

However, for inequality adjusted HDI (IHDI), India’s position drops by one position to 130, losing nearly half the progress (.647 to .477) made in the past 30 years. The IHDI indicates percentage loss in HDI due to inequalities.

The report notes that group-based inequalities persist, especially affecting women and girls and no place in the world has gender equality. In the Gender Inequality Index (GII), India is at 122 out of 162 countries. Neighbours China (39), Sri Lanka (86), Bhutan (99), Myanmar (106) were placed above India.

The report notes that the world is not on track to achieve gender equality by 2030 as per the UN’s Sustainable Development Goals. It forecasts that it may take 202 years to close the gender gap in economic opportunity one of the three indicator of the GII.

The report presents a new index indicating how prejudices and social beliefs obstruct gender equality, which shows that only 14% of women and 10% of men worldwide have no gender bias.

The report notes that this indicates a backlash to women’s empowerment as these biases have shown a growth especially in areas where more power is involved, including in India. The report also highlights that new forms of inequalities will manifest in future through climate change and technological transformation which have the potential to deepen existing social and economic fault lines.