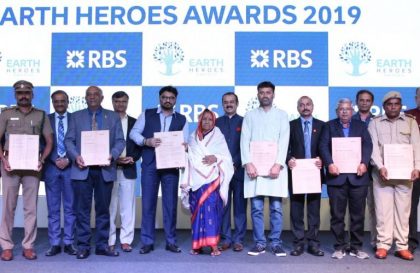 RBS India, the innovation and operations hub of Royal Bank of Scotland announced the winners of the 9th edition of the RBS Earth Heroes Awards (REHA), who have made a significant mark in the space of “Climate Change” – the theme for the 2019 awards.

The Awards are an attempt to recognise the grit and determination of individuals and institutions who went beyond their call of duty with an aim to preserve and protect our environment.

The Winners of the 2019 RBS Earth Heroes Awards are :

RBS Earth Heroes Awards were institutionalised in 2011 to provide a national platform to those individuals and institutions that have espoused and undertaken actions to protect our endangered forest, wetlands and other natural ecosystems. The award winners were selected by an independent jury comprising eminent personalities from conservation science and management, media and the government.

RBS set up the RBS Foundation in India in 2007 to strengthen communities, improve livelihoods and promote conservation in over 1,100 villages since its inception. The Foundation’s 22 projects across Tamil Nadu, Karnataka, Kerala, Andhra Pradesh, Madhya Pradesh, Gujarat, Rajasthan, Odisha, West Bengal, Uttarakhand, Jammu & Kashmir and Uttar Pradesh, continue to benefit over 1,00,000 families. RBS is a UK-based banking and financial services company, headquartered in Edinburgh.