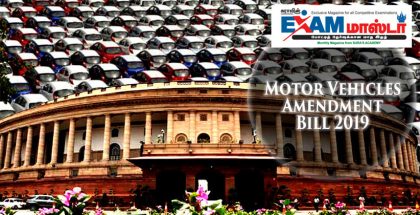 The Motor Vehicles (Amendment) Bill, 2019 was passed by Parliament.50 The Bill seeks to amend the Motor Vehicles Act, 1988 to provide for road safety. The Act provides for grant of licenses and permits related to motor vehicles, standards for motor vehicles, and penalties for violation of these provisions. The Bill provides for recall of vehicles, exempting good samaritans at an accident from any legal proceedings, regulation of taxi aggregators and increasing penalties for various offences.

Other key features of the Bill include:

Compensation for road accidents : The Bill provides that the central government will develop a scheme for cashless treatment of road accident victims during golden hour. Golden hour is defined as the time period of up to one hour following a traumatic injury, during which the likelihood of preventing death through prompt medical care is the highest. The central government may also make a scheme for providing interim relief to claimants seeking compensation under third party insurance.

Road Safety Board : The Bill provides for a National Road Safety Board, to be created by the central government through a notification. The Board will advise the central and state governments on all aspects of road safety and traffic management including: (i) standards of motor vehicles, (ii) registration and licensing of vehicles, (iii) standards for road safety, and
(iv) promotion of new vehicle technology.