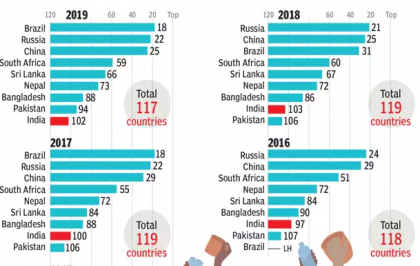 The latest Global Hunger Index (GHI) has ranked India a lowly 102 among the 117 countries it has mapped. In 2018, India was pegged at 103 but last year 119 countries were mapped. So while the rank is one better this year, in reality, India is not better off in comparison to the other countries. The GHI slots countries on a scale ranging from “low” hunger to “moderate”, “serious”, “alarming”, and “extremely alarming”. India is one of the 47 countries that have “serious” levels of hunger.

On the whole, the 2019 GHI report has found that the number of hungry people has risen from 785 million in 2015 to 822 million. It further states that “multiple countries have higher hunger levels now than in 2010, and approximately 45 countries are set to fail to achieve ‘low’ levels of hunger by 2030”.

Global Hunger Index : The GHI has been brought out almost every year by Welthungerhilfe (lately in partnership with Concern Worldwide) since 2000; this year’s marks the 14th report. A low score gets a country a higher ranking and implies a better performance.

The reason for mapping hunger is to ensure that the world achieves “Zero Hunger by 2030” – one of the Sustainable Development Goals laid out by the United Nations. It is for this reason that GHI scores are not calculated for certain high-income countries. While in common parlance hunger is understood in terms of food deprivation, in a formal sense it is calculated by mapping the level of calorie intake.

But the GHI does not limit itself to this narrow definition of hunger. Instead, it tracks the performance of different countries on four key parameters because, taken together, these parameters capture multiple dimensions – such a deficiency of micronutrients – of hunger, thus providing a far more comprehensive measure of hunger.

For each country in the list, the GHI looks at four indicators :

Undernourishment (which reflects inadequate food availability) : calculated by the share of the population that is undernourished (that is, whose caloric intake is insufficient);

Child Wasting (which reflects acute under nutrition) : calculated by the share of children under the age of five who are wasted (that is, those who have low weight for their height);

Child Stunting (which reflects chronic under nutrition) : calculated by the share of children under the age of five who are stunted (that is, those who have low height for their age);