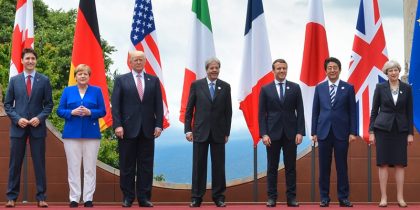 The 45th Annual G7 Summit was held on 24-26 August 2019, in the French town of Biarritz. G7 Summit is an event conducted annually where world leaders from seven powerful economies of the world come together to discuss burning issues happening around the globe. They, by mutual understanding, also form policies or figure out remedies for the concerned issue.

The 2019 G7 Summit, presided over by France, will focus on fighting inequality. France has identified the following five objectives for the Summit :

3.   Strengthening the social dimension of globalization.

4.   Taking action for peace against security threats and terrorism.

5.   Tapping into the opportunities created by digital technology and artificial intelligence (AI).

The G7, originally G8, (Russia was excluded due to crimea issue) was set up in 1975 as an informal forum bringing together the leaders of the world’s leading industrial nations.

The summit gathers leaders from the European Union (EU) and the following countries :

On the agenda for this year’s summit will be the ongoing trade war between the United States and China, the European-backed nuclear deal with Iran currently opposed by President Trump, and the unrest that continues to unfold in Hong Kong.